Nine Princes in Amber by Roger Zelazny: A review

It’s been quite a while since I’ve read fantasy and it was nice to go back to it. Nine Princes in Amber is more of a hack and slash style of Fantasy, but it was an interesting read nonetheless. 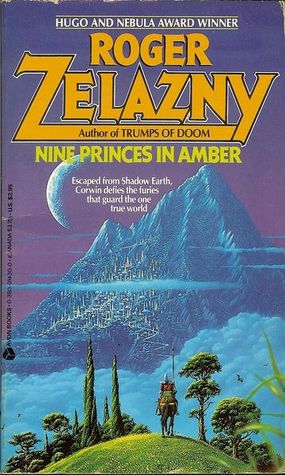 The first half builds the story in terms of shrewd discoveries made by the protagonist Corwin, himself one of the nine living princes of Amber, a fantastical city which is supposed to be on the ‘real’ earth of which our own, and billions of others, are mere shadows.

I say shrewd because Corwin has lost his memory and he makes these discoveries by being very clever with his brothers and sisters and allowing them to reveal the secrets of the princes to him. It makes for some nice interactions and there are a lot of witticisms in the book. Sample this –

I shut the door behind me, advanced, and said:
“Good morning. You’re in trouble.”
People must always be curious as to trouble, because after the three seconds it
took me to cross the room, his words were:
“What do you mean?”

Ahaha! See what I mean?

But other than this, there is also a nice story arc that keeps you engaged. There is not too much gore and Corwin and his brothers don’t seem to want to kill each other immediately. They rely instead on insults and insinuations, of which Corwin is a master.

This is the first in a series of Amber Chronicles and lays the foundation for the next in the series. But it has its fair share of magic, fantasy, legend, myth and glory. There are many characters with long-winded back-stories that are waiting to be explored and there are characters who have been deliberately kept out of the first book and an aura of mystery has been built around them. They will undoubtedly play a major role in the next few books.

Another thing that is quite similar to other fantasy series is that Corwin, of royal blood who is destined to take the throne, is also a kind-hearted prince who feels for the men who die for him. Reminding me of the remorse of Ashoka, a similar kind king from Indian history-

I suddenly felt tears come into my eyes, for the men who are not like the lords of Amber, living but a brief span and passing into dust, that so many of them must meet their ends upon the battlefields of the world.

It was a good book full of intriguing elements and lot of glamour. I suggest it to anyone who wants to take a break from the monotony of real-life fiction or non-fiction.

← The Mysterious Affair at Styles by Agatha Christie: A review
The Little Prince by Antoine de Saint-Exupery: A review →