The sense of an ending by Julian Barnes: A review

This book was suggested to me by my dear friend, Pavitra Vijayaraghavan. But like most novels that sound emotional and perhaps draining, I decided to let this one be for as long as I could. But I was constantly reminded to read it by Pavitra. I still managed somehow to avoid it, but no more. On 29th of August, I received a small note from her wishing me a wonderful year ahead (31st of August is my birthday). With that note, came a parcel containing this book titled ‘The sense of an ending’.

I don’t know if it was a clever juxtaposition of ideas by her to impress upon me the reality that birthdays are actually a celebration of the end that comes ever closer, or simply her fervent wish for me to read this book that made her send it to me for my birthday. But, that doesn’t really matter. Having received the book, I decided that the best way to thank her would be to read and review it before my birthday is up. So that’s what I did. 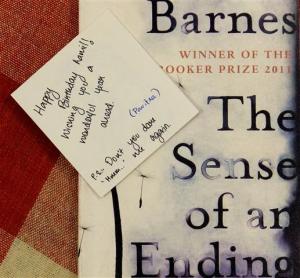 The note reads –
“Happy Birthday Aamil!
Wishing you a wonderful year ahead.
P.S. Don’t you dare ‘Hmm’ me again.”

When I started reading this book, I had a sense of the ending (I just couldn’t resist). I knew that I was going to read something terribly unpleasant and sad. I can safely say now, that the experience wasn’t unpleasant.

This is a sad book. But even among the sad books, this is a really sad one. It tackles death, despair, jealousy, failure, disappointment, anguish, remorse, regret, sorrow, betrayal and every other emotion that has the capacity to drain you and leave you lifeless.

But by doing an examination of all of these experiences through the life of one man who has been totally devastated by life, or perhaps, has devastated his own life, Barnes establishes that no matter how bad it may get, life can still get worse! So you’re still better off than what you’d be if you were worse off.

Don’t get it? Let me explain. What could be worse than living an average life that is full of insipid incidences with even failures that are far too ordinary? I would say that it would be to be lead such a life and then be remembered after your death as someone who made life miserable for everyone else.

And what in turn, could be worse than that? Perhaps, not to be remembered at all. To pass into oblivion after having lived a life that affected nobody. None at all.

Now wouldn’t that be sad? But that is almost what Tony Webster was looking at when suddenly he discovered that he mattered. Not in the best way possible, but he did matter. Something happens that makes him look back at his years spent and discover that they weren’t entirely that bad. That though he had a lot of regrets and was filled with remorse, he had tried to make amends and set things right, no matter how impossible it seemed.

The story talks about everything that can go wrong and still leaves you with a feeling that you will survive and you will not be victorious or defeated, when that happens you will just be. However, this is just my interpretation of the story. Yours might be different.

The story isn’t something that will blow you away, and even the twist towards the end looked quite deliberate and perhaps wasn’t even explained properly. Having said that, the story has certainly been written very well and is treat to read. Check out the quotes to see what I mean.

← The importance of being Earnest by Oscar Wilde: A review
Habu Ki Aag And Other Stories by Gulzar: A review →