Alice’s adventures in Wonderland by Lewis Carroll: A review

Where do I even begin? I think I’ll begin with how I went about reading this book. Well, I didn’t read it, I listened to it and what an absolutely enthralling experience it was! I know I had decided not to do audiobooks anymore, but I listened to the version by Eric Leach on LibriVox and it was the best thing ever! He’s done various accents and voices and tones and emotions and has enacted the entire story with just his voice. It is confusing to imagine the curious wonderland of Alice, but with Eric’s voice-acting, it is a treat. My faith in audiobooks having been restored, I will now take up The Hitchhikers Guide to the Galaxy read by none other than one of my favorite people ever, Stephen Fry! 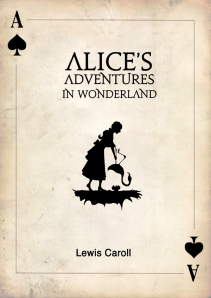 Coming to the story, there’s hardly anything I can say about it that hasn’t been said before. It is an awfully clever book, even for adults (especially for adults). Alice is an incredibly curious girl and it is her curiosity that lands her into so many troubles (adventures?). There are so many brilliant quotes in this book, each character has his own style of repartee and almost every conversation is riddled with some obscure reference or other. In fact, there are quite a few speculations behind the origin of these strange conversations, that seem to make no sense, and the subtext therein. There’s one that links them somehow to algebra. In fact, there are quite a few! I haven’t read these interpretations, but they sound quite interesting (and plausible).

In many analyses, it has been said that Alice in Wonderland is a quirky examination of the dark and uninhibited world of our subconscious. There is definitely a dream-like quality to the story and though it is sheer nonsense, it has a certain flow that the story follows, just like a dream.

If you’re not much into reading between the lines, then there’s ample obvious humor and queer exchanges to keep you going through the book. And if that isn’t enough, Alice talking to herself is immensely entertaining in itself. I’m really glad that I took up this book, and even more so because I chose to go with the audiobook. A thumbs up from me.

And if you’re curiouser than Alice herself, you might want to take a peek at my favorite quotes from the book.

← Encore!
To speak or not to speak. That is the question. →