Stuart McMillen is a comic writer who makes some fascinating and thought-provoking comics on socially relevant topics. One of these is ‘The War on drugs’ (Please read this comic before continuing) 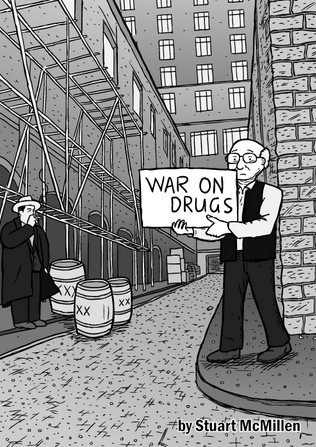 Even before reading this brilliant comic, I was of the opinion that prohibition is not the answer. I used the same explanation provided in the comic to convince anyone who asked me about my views on prostitution or the ban of alcohol in Islam and some places in India like Gujarat; that it was a bad idea.

However, this comic made me realize that it might apply to many other things and made me wonder if banning is bad in general, whether prohibition is always the bad choice and whether taboo or blacklisting is always the wrong way to deal with a problem.

It wasn’t surprising though, that I quickly realized that even this absolute might not be true. We can regulate services and commodities, we can regulate trade but how can we regulate crime? How can we regulate murder, rape or theft? Surely we have to ban these things, right? But then, these are all natural urges. With some people being able to control them better than the others. But I feel that even that is not something that can be said for sure. Even the best of people might snap under the right (wrong) circumstances.

If so, is it even remotely possible to satisfy these urges? In case it is, I believe that there could be a way to do some sort of regulation even in these cases.

In ‘Brave New World’, Huxley envisages a world where these urges are controlled or satisfied to a great extent, leading to overall peace and happiness. I don’t quite like the idea of subdued humanity under the influence of drugs, but there was one aspect that was not controlled by drugs and that was sex.

In the book, they have made sex a mundane activity. Much like playing a game. If someone wants to ‘have’ someone, they just have to ask. So there goes the urge to rape. But is it really that simple? How would you like the idea of ‘everyone for everybody’? Wouldn’t that take away the psychological reward associated with getting someone to get intimate with you? How would that change things?

In the book, Huxley doesn’t dwell on this much (or maybe he uses subtle hints that I might have missed), but I find that it is an interesting question. If we convert every urge of ours into a service and regulate it, how would it change things? There is another interesting question about human-farming related to this, that I think I will put up as another post, but till then, just putting this out here so I can have discussion with anyone who’s interested.

← Prayer to my thoughts
Good Night, Mr. Tom: A review →