The Trial by Franz Kafka: A review

A long time back, I started this book by a writer who was said to be the Salvador Dalí of the literary world (or maybe Dalí is the Kafka of the art world, but I digress). Kafka wrote some bizarre literature. So much so, that it earned him his own adjective – Kafkaesque; a nightmarish situation which most people can somehow relate to, although strongly surreal. With an ethereal, “evil”, omnipotent power floating just beyond the senses.

The trial is truly Kafkaesque in that sense. The premise is so absurd that it becomes very interesting. It’s the story of a man, Josef K. (loved how the translator used ‘f’ instead of the ‘ph’ sound that is usually used for that name. Makes it so much more European) who is facing a trial, but doesn’t know what the charges are. The story follows him through this harrowing situation where he is met with inexplicable situations and confounding events that leave you with a foreboding sense of despair. 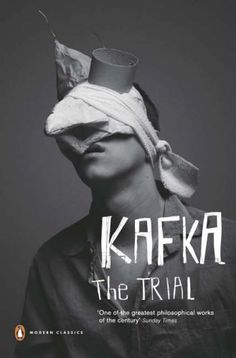 The story is just as bizarre as this cover, if not more.

The courts are weird and the servants of the court are weirder still. But, the lawyer who defends Josef and the painter whom he meets to seek his help are just insane! There are also 4 female characters in the story who have a very strange relationship with K. Mrs. Grubach his landlady, loves him to bits and admires him despite the trial looming over his head. Miss Bürstner, initially likes him but becomes hostile for some unexplained reason and avoids him completely. There’s a woman from the court who is a court servant’s wife, who looks upon K. as her deliverer and beseeches him for help. And finally, there’s Leni, the maid at the Lawyer’s house who finds him incredibly attractive and irresistible.

There’s a lot that Kafka is trying to say through these characters. And it is interesting to note how different people react to the news of him being charged for a criminal offence.

What stands out though, is the mind-numbing bureaucratic maze that K. has to navigate. This, I think is Kafka’s forte, to bring out the absolute despair and hopelessness of the legal system in a surreal and disconcerting way, with brilliant undertones of satire and an overwhelming sense of inescapable doom.

Throughout the story, K. is convinced that he is innocent, but not at one point is he unaffected by this mysterious allegation that has come to claim him. There’s no question about his innocence, but he shows all the tell-tale signs of a guilty person, especially because he tries not to show them.

Towards the end, Kafka discusses one of my favorite parables (written once again, by himself), “Before the law“, and presents amazing contrasting opinions on the same story that lend a lot of perspective to the novel and establishes the story in better light. It is the last few pages of the book that actually made me like it. So, I would suggest that you shouldn’t give it up mid-way.

This is a book that will take a bit of effort to keep up with, but once you get used to the style, it is a brilliant read with some stunningly real descriptions of mundane events in such a surreal context. See for yourself in this collection of excerpts from ‘The Trial’.

Rating – 8/10 (Definitely worth a read. For the brilliant exposition on the parable alone)